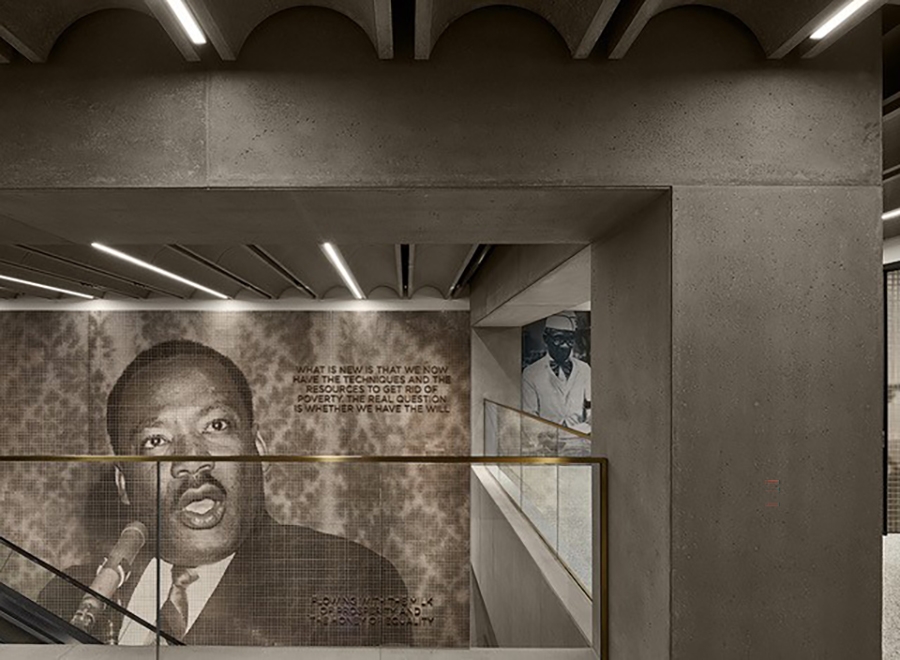 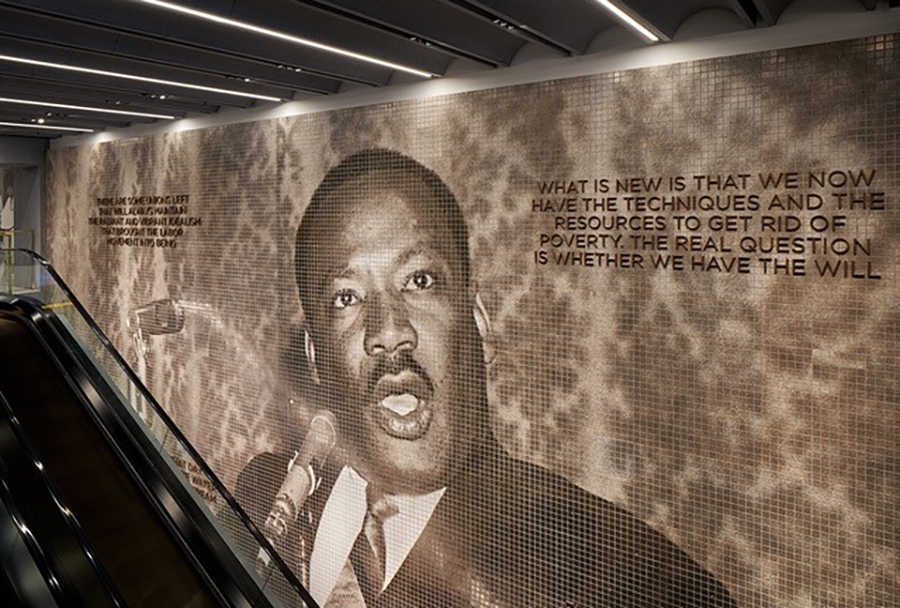 In early 2020, Service Employees International Union (SEIU), one of the largest labor unions for workers in healthcare, public services, and property services, began to reimagine and renovate its corporate headquarters in New York City. Embarking on this endeavor during a time when the contributions of essential workers were more visible than ever, Litelab joined Adjaye Associates and Dot Dash to provide SEIU with a contemporary headquarters that recognizes its heritage of labor activism and civil rights advocacy.

SEIU’s new headquarters celebrates the union’s rich history, and serves as a monument to the thousands of workers that it has represented and protected since it was founded in 1941. SEIU has a history of inclusion and diversity, and a legacy of rights advocacy that has seen the union closely involved in and aligned with the civil rights movement. The union actively fought to end segregation, and attended the March on Washington.

Today, the organization continues to support workers and marginalized communities, while advocating for essential workers. Many of the issues that SEIU combatted early in its history are still prevalent today, and have been amplified during the COVID pandemic, which saw African American healthcare workers experience disproportionately high levels of illness and mortality compared to their peers. Groups represented by the union also struggle with substandard pay and benefits for physically and psychologically demanding work.

Throughout the pandemic, healthcare workers have been at the front lines, risking themselves and their families to aid the sick and dying. While the threat of the virus is becoming less severe, the physical and emotional toll of healthcare work remains high, with many hospitals across the U.S. still experiencing severe levels of occupancy. The politicization of the virus has only added to the challenges faced by healthcare workers.

In the redesign of SEIU’s headquarters, Adjaye Associates used the union’s rich history as a focal point of the building, creating a multi-layered narrative within the central circulation void around which the building is organized. Starting at the ground floor, murals depicting Hospital, Guild and Drug division workers transition into a three-story image of Dr. Martin Luther King, Jr. giving his ‘Salute to Freedom’ speech to SEIU members in 1968. Originally inspired by the tilework traditions of Mexico, these murals represent the first use of extensive tilework employed by Adjaye Associates.

Litelab was approached by the lighting designer, Dot Dash, to design and fabricate a very shallow and narrow downlight capable of lighting the three-story King mural. The ceiling is comprised of barrel vaults, which give the space an open, soaring sensibility. Lighting is restricted to the relatively thin line defined by the parallel overlap of adjacent vaults. We were tasked with developing a downlight small enough to fit inside this thin area, and powerful enough to light a three-story space (without overheating). Litelab designed a very powerful, very small downlight multiple that fit inside the required dimensional restrictions, and fulfilled the performance requirements of the project.

The SEIU building is a testament to the union’s rich past and a guiding light for the union’s future goals and mission. The narratives depicted in its central circulation space articulate a vision of struggle, achievement and on-going commitment to workers’ rights and civic equality. Litelab is proud to have been a part of this inspirational project, which celebrates the contributions of healthcare workers, and the union that supports them.